Everything abstract is ultimately part of the concrete. Everything inanimate finally serves the living. That is why every activity dealing in abstraction stands in ultimate service to a living whole.

Quote for the Week (Slightly Belated) 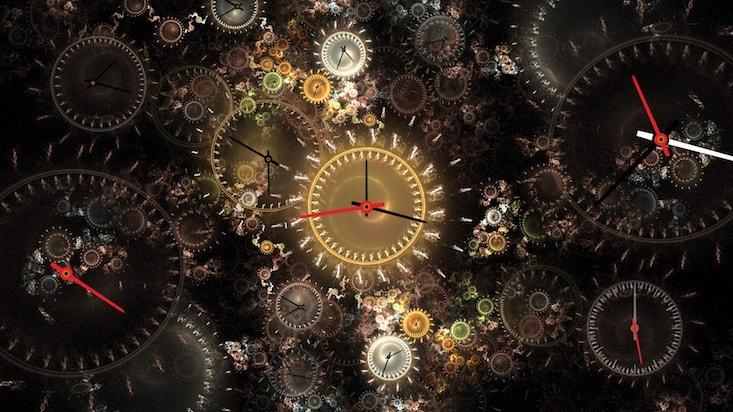 That time either has no being at all, or is only scarcely and faintly, one might suspect from this: part of it has happened and is not, while the other part is going to be but is not yet, and it is out of these that the infinite, or any given, time is composed. But it would seem impossible for a thing composed of non-beings to have any share in being.

Posted in metaphysics, philosophy, quote of the week, quotes 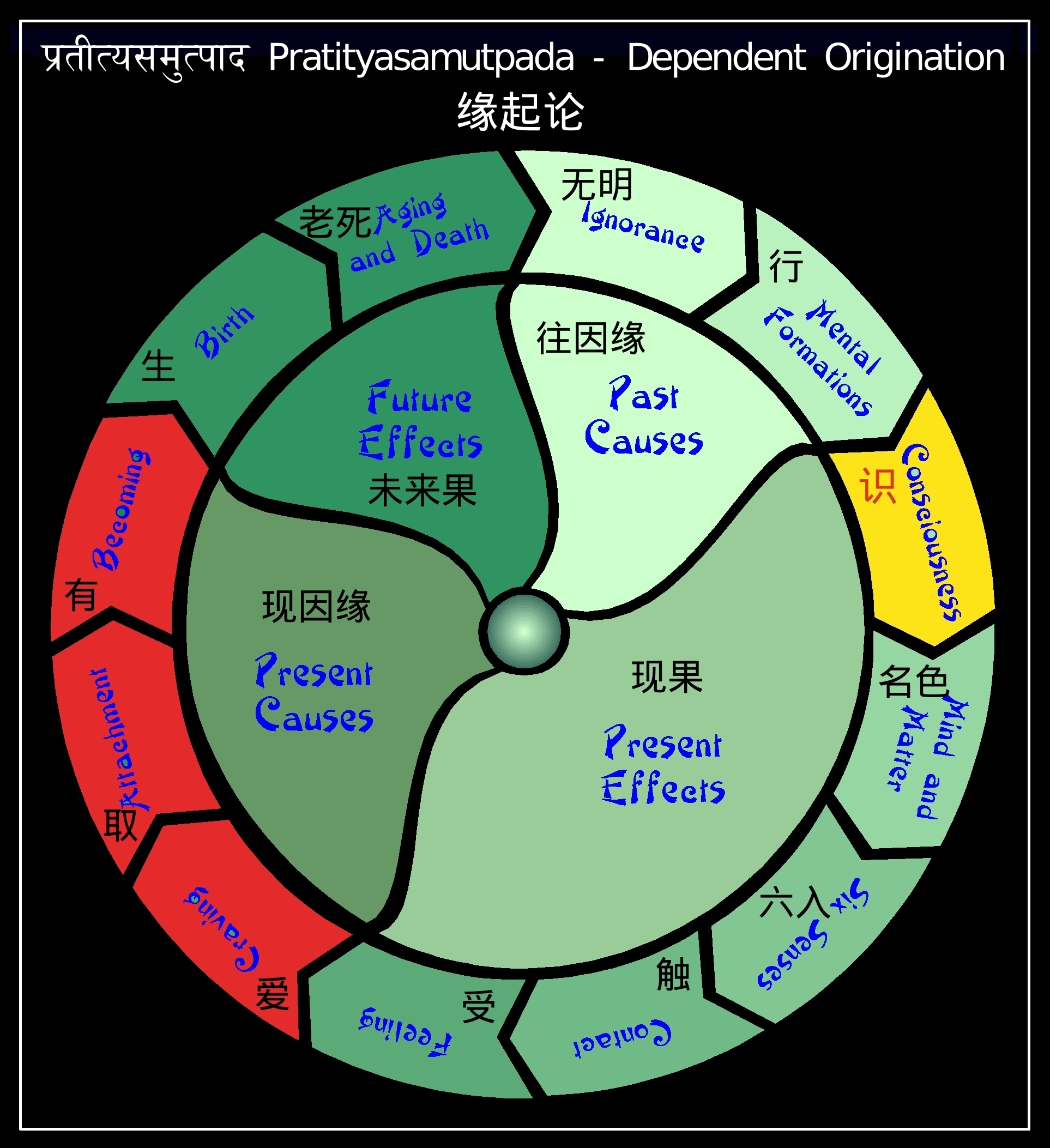 One of the most important concepts in all schools of Buddhism is pratītyasamutpāda (in Sanskrit–the Pali form is paṭiccasamuppāda).  The word is a very long one in either of the classical languages of Buddhism, but it is not only a key philosophical notion in Buddhist thought, it has a much wider applicability, particularly in the modern, industrial, interconnected world in which we live.  I have referenced it here and there in different places on this blog, and in various comments I’ve made on other blogs I frequent.  Despite this, I’ve not spoken about the term in and of itself at any length.  That’s an omission that needs to be rectified, since pratītyasamutpāda easily deserves a post of its own, particularly as a resource for future reference in discussion in which it turns up.

The first step in discussing pratītyasamutpāda is to translate it–what the heck does it mean?  Edward Conze, one of the most important Western scholars of Buddhism in the mid-20th Century, delightfully translates the Sanskrit mouthful as an English mouthful:  “conditioned co-production”.  This is actually a petty good root-by-root rendering of the Sanskrit, but it is, as noted, quite a mouthful and perhaps not so delightful to the general reader.  Other renderings include “conditioned arising” and “dependent arising”.  The most common rendering I’ve seen is “dependent origination”, so this is what I’m going to use for now.  So, we have a translation; but still, what does it mean?

END_OF_DOCUMENT_TOKEN_TO_BE_REPLACED

The Best Laid Plans (Do Not Require a Plan B)

The best-laid schemes o’ mice an’ men
Gang aft agley,
An’ lea’e us nought but grief an’ pain,
For promis’d joy!

–Robert Burns, “To A Mouse, On Turning Her Up In Her Nest With The Plough”

This is famously misquoted in standard English (as opposed to Burns’s Scots dialect) as “The best-laid plans of mice and men go oft awry.”  In any case, the sentiment is true enough.  How often do we plan something only to have events seemingly conspire to screw it all up?  How often does the most meticulous planning crash and burn before our eyes?  It’s not for no reason that we have the American idiom “Plan B”.  This is, of course, what you do–or attempt to do–when your original idea, Plan A, fails.  Sometimes we seem to run through the whole alphabet of plans and still things “gang agley”.  Then again, we’re not God.

The point I’m getting at here is something I’ve alluded to numerous time over the course of this and other series of posts at this blog.  In this post, I want to address the matter in a more direct and explicit manner.  The matter at hand relates to the interpretation of the Fall of Man, as described in the opening chapters of the Book of Genesis.  My main purpose in “Legends of the Fall” has been to try to find a way to understand the aforementioned Fall given our current understanding of human origins and the impossibility of reconciling that understanding with the Genesis account.  I’m still pretty far out from coming to such an understanding, admittedly.  Nevertheless, I think it is useful to look at issues which, while partially tangential, nevertheless have implications for the course of the main argument.

END_OF_DOCUMENT_TOKEN_TO_BE_REPLACED 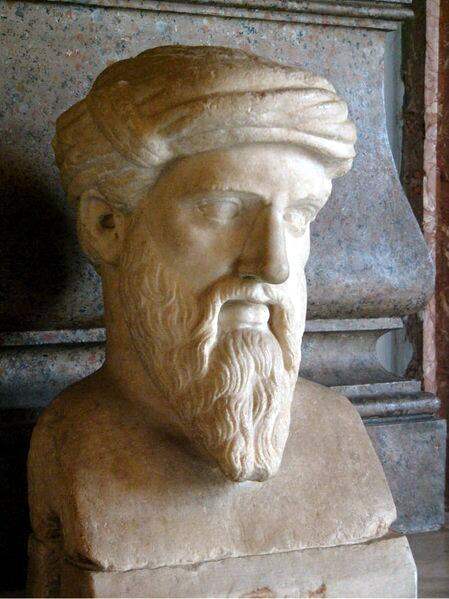 We ought so to behave to one another as to avoid making enemies of our friends, and at the same time to make friends of our enemies.

–As quoted in Diogenes Laërtius, Lives and Opinions of Eminent Philosophers, “Pythagoras”, Sect. 23, as translated in Dictionary of Quotations (1906) by Thomas Benfield Harbottle, p. 320; courtesy of Wikiquote.

Posted in philosophy, quote of the week, quotes

Interpenetration is an important teaching, but it still suggests that things outside of one another penetrate into each other. Interbeing is a step forward. We are already inside, so we don’t have to enter. In contemporary nuclear physics, people talk about implicit order and explicit order. In the explicit order, things exist outside of each other — the table outside of the flower, the sunshine outside of the cypress tree. In the implicit order, we see that they are inside each other — the sunshine inside the cypress tree. Interbeing is the implicit order. To practice mindfulness and to look deeply into the nature of things is to discover the true nature of interbeing. There we find peace and develop the strength to be in touch with everything. With this understanding, we can easily sustain the work of loving and caring for the Earth and for each other for a long time.

–Thich Nhat Hanh, The Sun My Heart; courtesy of Wikiquote.

Posted in ethics, philosophy, quote of the week, quotes

Tags: Confucius, philosophy, quote of the week, quotes, The Analects 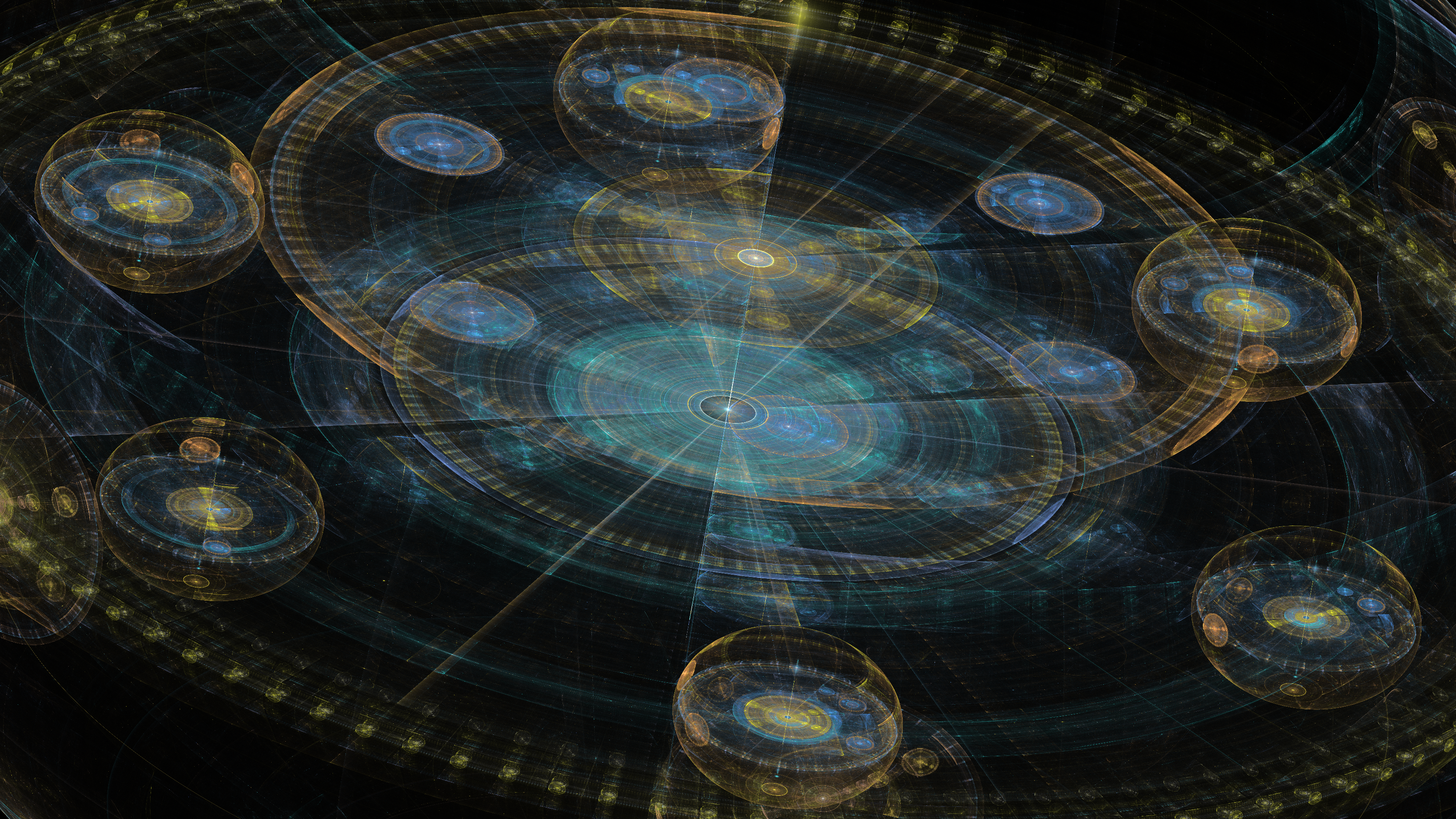 But if any excursive brain rove over the images of forepassed times, and wonder that Thou the God Almighty and All-creating and All-supporting, Maker of heaven and earth, didst for innumerable ages forbear from so great a work, before Thou Wouldest make it; let him awake and consider, that he wonders at false conceits. For whence could innumerable ages pass by, which Thou madest not, Thou the Author and Creator of all ages? or what times should there be, which were not made by Thee? or how should they pass by, if they never were? Seeing then Thou art the Creator of all times, if any time was before Thou madest heaven and earth, why say they that Thou didst forego working? For that very time didst Thou make, nor could times pass by, before Thou madest those times. But if before heaven and earth there was no time, why is it demanded, what Thou then didst? For there was no “then,” when there was no time.

Posted in philosophy, quote of the week, quotes

If You See Yoda on the Road, Kill Him! A Defense of The Last Jedi 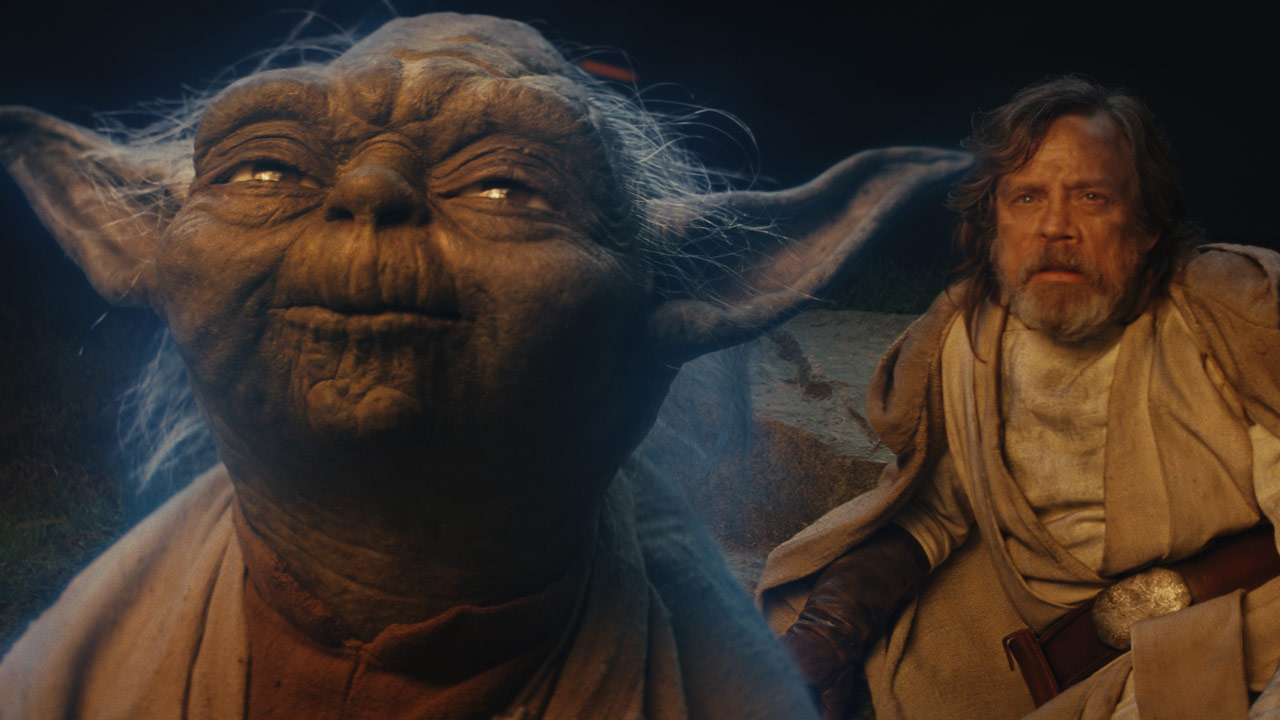 I am, of course, aware that Yoda is already dead, and has been for decades.  Bear with me on this….  Beginning in 2015, the long-dormant big-screen incarnation of the Star Wars franchise was revived.  All the original cast returned, playing their iconic characters, and fresh new faces playing new characters were also present.  It was the first time since Revenge of the Sith in 2005 that a big-screen Star Wars movie had been made at all, and the first time since Return of the Jedi in 1983–thirty-two years previously!–that the original cast was back in action.  As of this writing (July 2019), two of the movies of the third and final trilogy–The Force Awakens and The Last Jedi–have been released, with the third, The Rise of Skywalker, slated for release in five months.  Two standalone movies, Rogue One and Solo have also been released, and further movies with a new cast are projected; but the main attention has been focused on the three movies which conclude the Skywalker saga.  Fan and critical reaction has been sharply divided on the two released so far, with seeming storms of controversy regarding The Last Jedi in particular.

I don’t really have anything to add to the discussion in terms of a conventional movie review or rating.  It’s been forty-two years since the original Star Wars debuted, and I still don’t think The Empire Strikes Back has been topped.  I certainly don’t have any interest in further stirring the pot of accusations and counter-accusations of sexism, racism, political correctness, and so on and so forth.  More heat than light has been generated on this front, and I doubt there is much likelihood of dialogue in this area, anyway.

What I do want to look at is the metaphysics, or perhaps more precisely, the philosophical and spiritual themes that are present in The Last Jedi and which have been little remarked on in all the tempestuous arguments about other issues.  I think The Last Jedi has definite flaws (some of which, in fairness, were inherited from the plot of its predecessor, and some of the stupid and cockamamie decisions J. J. Abrams made in writing the script for said predecessor), drags somewhat in the middle, and arguably loses focus a bit by expanding the already expanded cast even further.  I definitely would not place it above The Empire Strikes Back.  All that said, I would argue that Last Jedi is actually the second-best movie of the seven Skywalker-centric sequels and prequels to the original Star Wars, right after Empire (and allowing for the fact that Episode IX has not yet been released).  This, I assert, is because of the themes I have already alluded to, and because The Last Jedi is the only movie in the entire Star Wars franchise to take those themes seriously since The Empire Strikes Back (Rogue One made a nod towards some of these themes, but not to the extent that Last Jedi does).  Some of these films have been around quite awhile, and some not; but just to play fair, SPOILERS ABOUND for all the movies in the franchise from this point onward–tread with caution!

END_OF_DOCUMENT_TOKEN_TO_BE_REPLACED 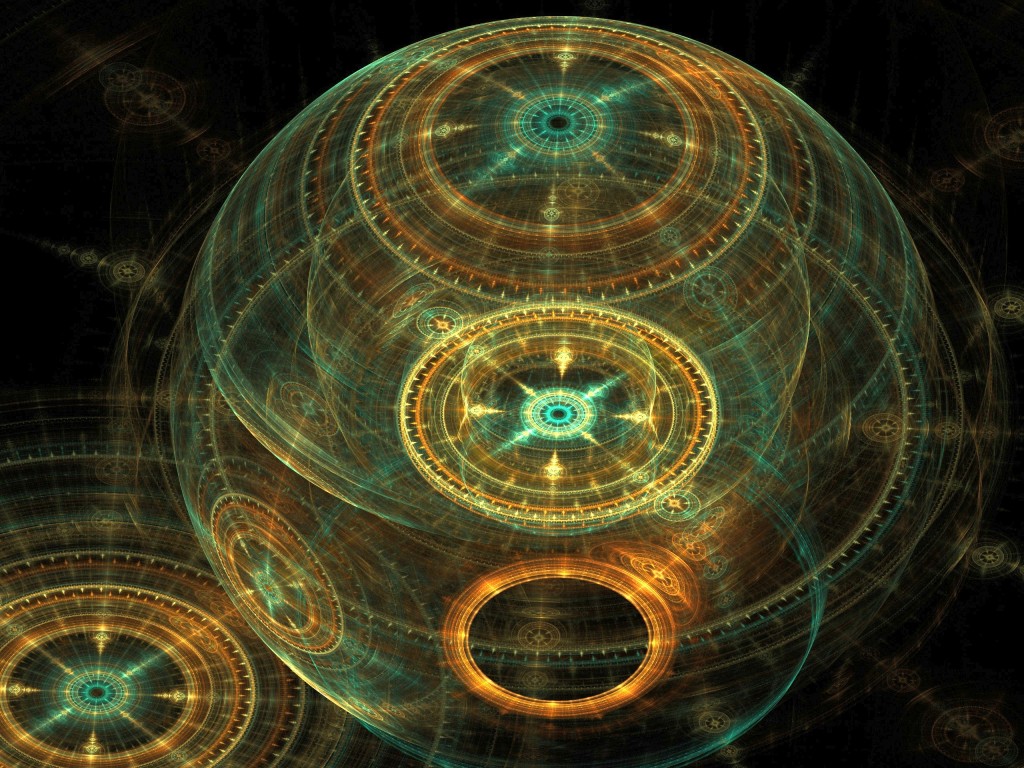 Musical training is a more potent instrument than any other, because rhythm and harmony find their way into the inward places of the soul; on which they mightily fasten, imparting grace, and making the soul of him who is rightly educated graceful, or of him who is ill-educated ungraceful.

Posted in music, philosophy, Plato, quote of the week, quotes