I Ain’t Got No Body, Revisited: Rethinking Angels

Way back here we looked at the question of why humans are created as embodied beings.  In most Abrahamic religions, and in some other Western religious systems, as well (e.g. Platonism and Gnosticism), God is said to have created the bodiless intelligences–what we call “angels”, some of whom later become “demons”–before He made embodied intelligences–that is to say, us.  Since the angels are typically seen as far superior to us, the question arises as to why God bothered in making embodied creatures to begin with.  I came to no definite conclusion on this question, though I have some ideas banging about in my head.  What I want to do here is to put a different spin on the whole question by looking at the angels and speculating as to what, exactly, they are.  This will tie in with some other themes we’ve looked at.

In the Christian tradition*, beginning with Pseudo-Dionysius the Areopagite and continuing through various Church Fathers and theologians throughout the centuries (not least of whom as St. Thomas Aquinas in the West), angels have always been understood to be bodiless spirits.  In our discussion of the soul a little while back, we described the human soul as the seat of personality and intelligence, which is immaterial and which can survive the death of the body.  An angel has a personality and intelligence, just like a human; but it has no body.  Thus, an angel could be viewed as a pure mind.  Angels, of course, are often described as being humanoid in appearance–and sometimes, spectacularly, non-humanoid (see Ezekiel 1:4-21, Isaiah 6:2, and Revelation 4:6-8, for example).  Despite this, though, they lack physical bodies–such appearances are for the benefit of humans.  The angels either take on a temporary body (to put it in modern terms, they manipulate matter into a body which they use like a puppet) or manipulate the viewer’s mind so that they see an apparition that isn’t physically there (something like this is implied in the Book of Tobit, when Raphael reveals himself to be an angel; see Tobit 12:15-19). Theologians have debated which of these scenarios is likelier; but they have agreed that angels have no bodies of their own.

END_OF_DOCUMENT_TOKEN_TO_BE_REPLACED

Arguments Against Universalism: Your Own Damn Fault, Part 2–Better to Reign in Hell 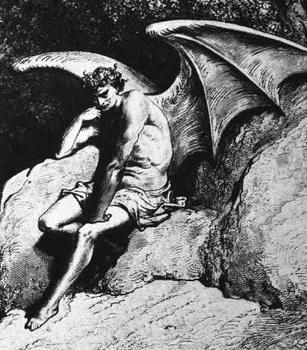 We’ve been looking at arguments against universalism.  Here, here, and here we considered the traditional view that God damns sinners to eternal hell as a form of retributive punishment, and found it lacking.  Last time, we looked at the notion that the damned actually damn themselves.  From an external perspective, which is what we considered, it seems that such a system paints God in every bit as bad a light as does the notion of His vindictively casting sinners into hell.  There is, however, another, more psychological flavor of the “damned are in Hell because they damned themselves” argument.  I’ve touched on it in the past, but I want to look at it in greater detail now.

The argument is in brief that those who are ultimately lost have not transgressed a rule or set of rules that God has implemented and thus failed to make the cut for Heaven.  Rather, they have made themselves, by their own choices, incapable of Heaven.  To use an analogy:  If I loaf around as a couch potato and don’t go to training sessions, I won’t make the track team.  This won’t be a punishment as such–rather, it’s because I won’t have the ability to run!  Moreover, if I hate track, then to me, being a couch potato is even desirable!  Thus, in a sense, the damned not only have cultivated attitudes and habits that make it impossible for them to appreciate Heaven, but they also get what the really want.  Hell, to them, is perhaps not a punishment, but an actual desire.  This model of damnation is strikingly–and chillingly–described in C. S. Lewis’s classic novel The Great Divorce.