Colonial-era Weapons of The Patriot 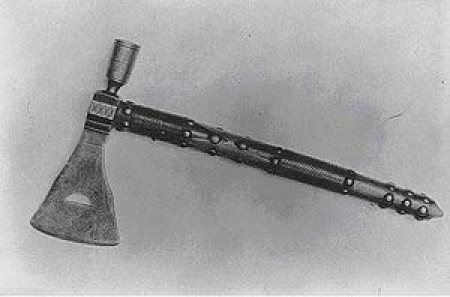 I wrote the following essay a few years ago after seeing the Mel Gibson movie about the American Revolution, The Patriot.  Enjoy!

The Patriot, as a Revolutionary War movie, mainly depicts black powder rifles and cannon in the battle scenes. However, two edged weapons that are prominent in the movie are the sabre, used especially by the evil British Col. Tavington, and the tomahawk, used by the hero Ben Martin. We know, in fact, that the crucial juncture in Martin’s decision to enter the war has arrived when he brings out his old tomahawk from storage. The final battle between him and Tavington, of course, is fought hand-to-hand with these weapons. Let’s take a look at these early American weapons.

The sabre (or saber–both spellings are used) was the standard sidearm of the officer corps on both sides during the Colonial/Revolutionary era. The sabre is a curved, single-edged weapon about 2 1/2–3 feet long. It can be used for stabbing, to a limited extent, but is principally a slashing weapon. This makes it ideal for use from horseback, which is why it was mainly a weapon of cavalry and officers. Foot soldiers used mainly bayonets or knives (the precursors of the Bowie knife). The movie is very accurate in its portrayal of sabre use. The sabre was reserved until the charge. The idea was that both sides would line up on the battlefield and fire several rounds at each other in turn. When one side was confident that the foe was getting the worse of it, the general would command a charge. If all went well for the charging side, the enemy would break and run. Whether they did or not, bayonets and swords were used at this stage because the rifles and pistols of the era were impossible to reload on the run. Thus, like the Roman gladius or the modern service pistol, the sabre was used in the hand-to-hand phase of battle, which usually came near the end of the engagement.

END_OF_DOCUMENT_TOKEN_TO_BE_REPLACED

Having watched the movie The War Lord, which is reviewed elsewhere in this site, I got to thinking about the so-called “right of first night”.  This is a major plot element in the movie, as it also is in the movie Braveheart.  Also, as is less well known, it is one of the most controversial topics of Medieval history. I thought therefore that it would be of interest to discuss this issue in the context of its times and with reference to whether it is actually factual.

To begin with, I would first like to sketch the basic outlines of how feudal society works, in order to have the proper context for understanding the “right of first night”.   Most movies are abysmal in correctly portraying Medieval politics (an area in which The War Lord succeeds very well, incidentally) and show little or no understanding of feudalism.   Sadly, even most schools and history classes and many books and novels don’t do much better.  Thus, a little Feudalism 101 will not be a complete digression. END_OF_DOCUMENT_TOKEN_TO_BE_REPLACED