The Disenchantment of the World, Part 3: The One God Triumphs 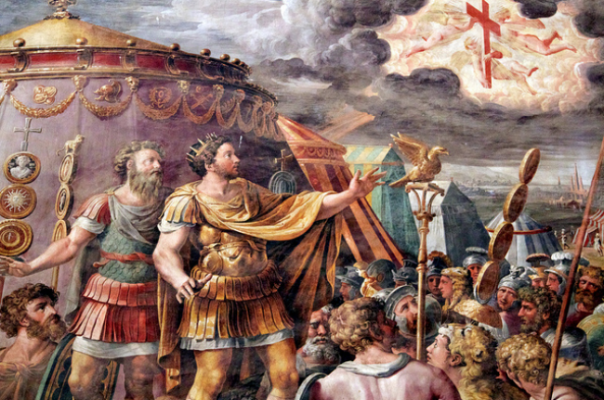 We’ve looked at ancient pagan religion and the changes brought about by ethical monotheism, as manifested by Judaism.  It is still necessary to determine how the change from the former to the latter (at least in the form of Christianity) occurred.  Ancient pagan society was in many ways extremely tolerant and pluralistic, things we tend to value.  If these were its features, what were its bugs, that it was replaced?

It is important, first of all, to acknowledge that much of the process of conversion was accomplished not because of any inherent attractiveness of the new faith or real or perceived problems with the old, but for baser reasons.  As Christians increased in numbers, and especially after Constantine’s Edict of Milan decriminalized it, many converted for reasons of social advancement.  In short, if you can’t beat ’em, join ’em.  Later, Theodosius I, with the Edict of Thessalonica, made Christianity (specifically its Nicene form) not only legal but official, the motivation for conversion became even greater.  In the latter days of the Roman Empire, the pressures to convert increased as pagan temples and schools were closed.  After this, in the Middle Ages, conversions were often proclaimed by fiat when the local tribal chieftain or king converted (e.g. Vladimir of Russia).

Despite all this, it is true that even before all of these other factors came into play, Christianity was spreading like wildfire in the early days of the Roman Empire, and doing so despite persecution and intolerance.  By the time of Constantine, the population was about ten per cent Christian–still a minority, but a relatively sizable one.  This indicates some appeal of Christianity, and some weakness in the old ways.  What were they?

As we discussed last time, the religions of antiquity were centered mostly around cult, with conduct being more a matter of societal norms and creed, if a matter of concern at all, being something left to the philosophers.  The most important aspect of religion was that the sacrifices and worship of the gods continue according to the proper rites.  As long as this were done, all would be well for the state.  If the rites were to lapse, disaster would surely follow.  One might almost compare this to a divine protection racket, with the gods in short saying, “Nice city you got there–too bad if something were to happen to it….”  This must have been unsatisfactory for the more thoughtful and sensitive members of the populace. In the 6th Century BC, Xenophanes famously stated that if animals could make idols, they’d make images of the gods that looked like themselves, and asserted that the true god was immaterial and non-anthropomorphic.

Even among the ordinary populace, as far back as perhaps the second or third millennium BC, the mystery religions had been established in Asia Minor, Greece, and (perhaps) Egypt.  These provided something more for those unsatisfied with the state cult.  The mysteries, in their various forms, gave the initiates a way to achieve personal union with the deity (be that Demeter, Isis, Bacchus, or others) and the promise of life after death, beyond the mere shadowy existence of Hades.  The mysteries were non-exclusive–one could be initiated into more than one, and one was not obliged to reject the worship of other gods.  Still, they are the first inklings of a desire to go beyond a mere propitiation of the gods to a more personal devotion.

Into this context the Jews came in the 4th Century BC.  The city of Alexandria in Hellenistic Egypt became the New York City of its day; that is, the home to the largest number of Jews outside the Holy Land, whence many had been dispersed after the Babylonian captivity and the various other convoluted turmoils there.  Over the following centuries, the number of Jews in the Greco-Roman world steadily increased, reaching nearly a fifth of the population in some areas by the beginning of the Christian era.  It also brought about a creative interaction with the pagan culture of the Greeks and later the Romans.  The philosophers, in a sort of inchoate way, had been groping towards the idea of a single god above and behind all the panoply of the pagan pantheon.  They had also considered that this one god might have ethical expectations of humans that the capricious gods of Olympus did not.  One can see this in Socrates and Plato, as well as others such as Zeno, founder of Stoicism.  The Jews entered the Greco-Roman world already in possession of just such a One God, who was also a lawgiver.  They professed openly the god that the philosophers had hinted at.  Moreover, they could claim antiquity for their religion–antiquity being of great importance to the ancients, who disliked innovation.

On the other hand, the Jews had a host of–to the Greeks and Romans–bizarre customs.  They were not able to eat pigs, one of the main food animals of the region.  The were forbidden from reverencing the gods of the cities or of the nation.  The Romans actually granted an exception to them in this matter, in view of their demonstrable antiquity.  Circumcision, though, was not viewed as benignly; rather, it was seen as a horrendously barbaric custom.  At times, the Greco-Roman kings of Syria tried (unsuccessfully) to ban it.  There were many other complex requirements of Jewish law, which if followed fully would largely isolate Jews from Gentiles in public.  Thus, the pagans were both fascinated and repelled by the Jews:  drawn to the vision of ethical monotheism, which was more emotionally satisfying in many ways than the mechanical round of state-sanctioned rites; repelled by the complex requirements of halakhah and unwilling to undertake them.  Meanwhile, Jews agonized as to how far they should assimilate into the prevailing culture.

As a result of these tensions, two things began to occur.  One, Jews such as Philo of Alexandria and Flavius Josephus began to write books presenting Judaism as a philosophy.  They downplayed the aspects viewed by their pagan peers as barbaric, or tried to give philosophical reasons for them; and they greatly emphasized the goodness of their god and the superiority of the ethical teachings He gave, as opposed to the capriciousness of the Greco-Roman pantheon.  This laid the groundwork for the second trend, whereby many pagans became “God-fearers“.  Drawn to Judaism but unwilling and/or unable to embrace the full rigor of Jewish law, they became attached to Judaism  and to local synagogues to varying degrees.  They might give up, in full or in part, worship of the pagan deities, and replace this with worship of the God of the Jews.  They might even attend synagogue services or come to the Court of the Gentiles at the Temple in Jerusalem.  However, they would not fully convert to Judaism, in order to avoid the dietary and other restrictions, and to maintain connections with their families and larger culture.   In Luke’s version of the healing of the centurion’s servant (Luke 7:1-10), the centurion is portrayed as just such a God-fearer, who actually financed the local synagogue.

The importance of the God-fearers is thought to have been immense.  For the reasons discussed, the pagan Greeks and Romans found Judaism philosophically attractive while practically undesirable.  Even given this, it is believed that a fairly large number did in the end fully convert, accounting for the surge in Jewish population in the last few centuries BC.  On the other hand, converts were still far fewer in number than God-fearers.  Thus, there was a situation in which there was a relatively large pool of people attracted by and to some extent attached to Judaism but not willing to make the final step of conversion because of the social and religious barriers such conversion would impose.  And then came Christianity.

Christianity had ethical monotheism, too–in fact, it had the very same God as did the Jews.  It also had a visceral understanding of the importance of personal experience and devotion.  Jesus came personally to save those who followed him, acting in a loving and individualistic way not usually characteristic of the Olympians.  Further, the union with Christ in the Eucharist has been–not unfairly–compared to the union with the Divine in the mystery religions.  Couple this powerful appeal with what Christianity lacked–the complex requirements of Jewish law.  There was, of course, controversy about this in the early Church, with one faction insisting that one must embrace the whole of Jewish law before becoming Christian, and must maintain it afterwards, as well.  The faction represented by Paul (formerly Saul) of Tarsus, however, won out.  Christians need not be circumcised, nor follow kosher laws in diet, nor follow any aspect of Jewish law aside from its moral teachings.  The latter were more stringent than pagan custom–divorce was forbidden, as was infanticide–but this was appealing to those fed up with the moral laxity of urban culture at that time.

Thus, in one stroke Christianity demolished the barriers to incomers.  It had all of the features (monotheism, strong ethics) of Judaism, with none of the bugs (kosher laws, circumcision), and added an emphasis on love and mercy rarely seen in ancient culture, Jewish or Gentile.  It is hardly surprising that God-fearers began to convert in droves.  It is believed, in fact, that many Jews converted, too.  Some would have been second or third generation converts who saw the opportunity to return to mainstream culture while retaining their beliefs about God and their ethical standards.  Some were Jews whose ancestors had never been Gentiles but who were attracted to the message preached by the followers of Jesus of Nazareth.  In any case, it is true that the Jewish population, as well as the population of God-fearers, declined after this time, and much of this seems to have been through conversion to Christianity.

This by itself might well not have been sufficient to turn the whole Empire Christian–see the second paragraph of this post.  However, it did accelerate the process begun by the philosophers, whereby the world began to become “disenchanted” as the various gods, goddesses, and other spirit beings were dropped or assimilated into the new faith.  True enough, many of them survived under other names (fairies, elves, gnomes, etc.); but the dynamic had altered.  The real blow to the enchanted world came some seventeen hundred years after Christ, and it was dealt by the Enlightenment.

Part of the series “Religion, Role-playing, and Reality“