← The Heart Sutra
Quote for the Week → 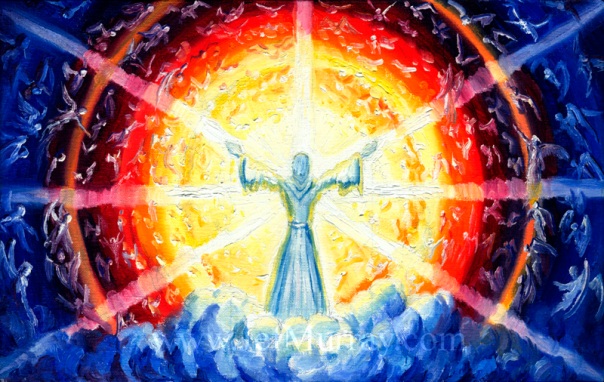 So, if we can’t assert that Adam and Eve were the original ancestors of all humans, and thus cannot assert the traditional Western explanation of Original Sin, then what do we do?  What I want to do is take ideas from some of the various sources I’ve cited over the course of this series (and some from J. R. R. Tolkien, in this post in particular) and try to see an alternate way of viewing Original Sin and the Fall of Humanity.   A good place to begin is to look at various ways of what we understand the Fall to be.  I have qualified my statements about the Fall several times, as above, by specifying “Western” in speaking of the relevant theology.  “Western” encompasses both Catholicism and Protestantism, which in some respects are flip sides of the same theological coin.  The Eastern Orthodox perspective, which is not well known in the West, differs significantly from that of both Catholics and Protestants.  A brief statement of the differences is here at the website of the Orthodox Church in America, my emphasis added:

With regard to original sin, the difference between Orthodox Christianity and the West may be outlined as follows:

One might look at all of this in a completely different light. Imagine, if you will, that one of your close relatives was a mass murderer. He committed many serious crimes for which he was found guilty—and perhaps even admitted his guilt publicly. You, as his or her son or brother or cousin, may very well bear the consequences of his action—people may shy away from you or say, “Watch out for him—he comes from a family of mass murderers.” Your name may be tainted, or you may face some other forms of discrimination as a consequence of your relative’s sin. You, however, are not personally guilty of his or her sin.

Thus, while the West tends to view Original Sin as a sort of metaphysical genetic disease passed from parents to child, Orthodoxy views it as the changed way in which humans relate to the world, each other, and God as a result of the consequences of Original Sin, chief among them death.  A concise statement of this is at the excellent Eastern Catholic website From East to West, once more with my emphasis:

In the East: The primary consequence of Original Sin is death. The reality of death causes people to desire that which can distract them from the reality of their impending death. Hence, people turn to sex, money, and power as a way to forget about death. In this way, death leads to sin.

This fits in somewhat better with modern science than the traditional Western view, but it is still problematic.  This still leaves the clear impression that prelapsarian humans were immortal–that had they not sinned, they would never have died.  This would fly in the face of everything we know about human biology, to say nothing of evolution, which requires mortality, as the less fit individuals die off to be replaced by the more fit, resulting in speciation.  I suppose one might say that once hominids had evolved to the point at which God wished to ensoul them, He would have made them immortal had they made the right choice; or did make them immortal until after the Fall.

This is somewhat like the theory of Adam’s descendants mating with humans who lacked souls–not disprovable (or provable, either), but rather ad hoc in an attempt to save as much of the traditional scenario as possible by dodging around the issue involved.  It would also involve a direct, miraculous intervention by God (making formerly mortal hominids immortal), and that does not seem to be the way God operates, in general.  The fewer such assumptions one makes, the better.

I think one way out of the impasse here is suggested by J. R. R. Tolkien.  As fans know, many volumes of his letters, drafts, essays, and so forth have been published by his son, Christopher, over the forty-odd years since his father’s death.  A striking thing about many of these is that Tolkien seems to have used his “secondary creation“–the world of Middle Earth–as a mode for making philosophical and theological reflections.  Middle Earth was very real to him, and he had stated that all human-made stories were in a sense reflections of the True Story–the real world–which God had created.  In short, through fiction one could understand aspects of the real world we live in better, in some ways, than through nonfiction.

In this regard, some of his ideas, stated through the fictional devices of short narratives in the setting of The Lord of the Rings, i.e. Middle Earth (though not explicitly stated in the novels themselves), directly address the issue of human mortality and the Fall.

Death is part of Man’s original nature and, therefore, is a gift of God. Tolkien’s writings are actually slightly unclear on this point, though perhaps deliberately. In one place it is said that some Men believe that death is a result of the fall of Men, but the Elves believed rather that the fear of death was the result of the fall. Due to the ever-changing nature of Tolkien’s views on his own mythology, one has difficulty deciding whether Tolkien was actually changing his mind or merely presenting the views of the people within his mythology without changing his own views. Nevertheless, the idea that death is not a result of the fall seems to be well enough established–indeed explicitly stated in some places–for one to assume it is the proper belief. “But the view of the myth is that Death–the mere shortness of human life-span–is not a punishment for the Fall, but a biologically (and therefore also spiritually, since body and spirit are integrated) inherent part of Man’s nature…. Death, in the penal sense, is viewed as a change in attitude to it: fear, reluctance.” (Tolkien, Letters 205)–from here, my emphasis added

Then there is this, from his “Debate of Finrod and Andreth”, an unpublished short story in the form of a dialogue between the elf Finrod and the human Andreth (from here, also with my emphasis added):

[Finrod says] But who did you [humans] this hurt? Who imposed death upon you? Melkor it is plain you would say … For you speak of death and his shadow, as if to escape from the Shadow was to escape also from Death.

‘But those two are not the same, Andreth. So I deem, or death would not be found at all in this world which he did not design but Another. Nay, death is but the name that we give to something that he has tainted, and it sounds therefore evil; but untainted its name would be good?’

Tolkien’s view is very similar to the Eastern Orthodox in that both view the main effect of Original Sin to be related to death and all the psychological consequences flowing from it, rather than the classical Western idea of an inherited guilt.  However, in Tolkien’s view, death logically must have been part of the Divine plan to begin with, since to assume otherwise would imply a massive alteration in the cosmos which seems inconsistent with the way God works in the world.  Thus, the Fall did not bring death, but fear of death, or a wrong relationship with death.  This fear and loathing of death is what causes humans, as described in the Orthodox quote above, to seek frantically for things to distract them from death, and thus bringing about the sinfulness of the world.

This ambiguity is seen in Tolkien’s reference to death as the “doom of man”.  “Doom”, of course, brings up for moderns the connotations of bad fortune, despair, and such; but its original meaning, in Old English, was simply “fate”, not necessarily “bad fate”.  It also had the connotation, originally, of “glory”.  Thus, in a profound layering of meanings in Tolkien’s term, what has always been the Fate of Man has come to be viewed as the Doom of Man, when it should have been the Glory of Man.

A good contrasting of this with the attitude which humans should have towards death is in the story of Aragorn’s death, in the appendices of The Return of the King (quote from here):

[Aragorn speaks to his wife, Arwen, who, as an immortal elf is distressed at the coming of his time to die and has begged him not to do so] Take counsel with yourself, beloved, and ask whether you would indeed have me wait until I wither and fall from my high seat unmanned and witless. Nay, lady, I am the last of the Númenoreans and the latest King of the Elder Days; and to me has been given not only a span thrice that of Men of Middle-earth, but also the grace to go at my will, and give back the gift. Now, therefore, I will sleep.

Of course, all this goes somewhat against the traditional account of the Fall, which may also be a reason that Tolkien–a devout Catholic writing for the most part before the Second Vatican Council–preferred to write on the issue obliquely through fiction than directly through theology.  In any case, I do find his model here compelling, and it is on that which I will base my further reflections on the Fall.

Part of the series Legends of the Fall.

← The Heart Sutra
Quote for the Week →