← My 50th Post!
Some Very Belated Music for the Labor Day Weekend → 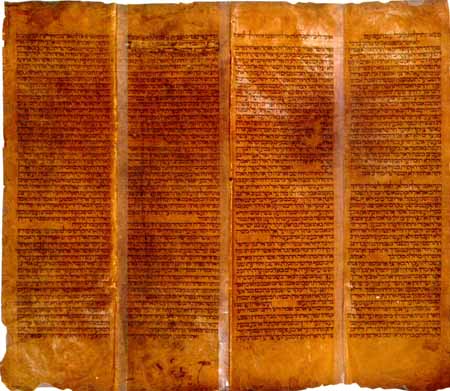 In previous posts here I’ve discussed issues regarding the Bible.  Here I return to a theme hinted at in the first installment and then dropped for a philosophical excursus.  In short, I’m going to talk a little bit about my personal response at different times in my life to the Good Book.

So I read the Bible twice, first the KJV and then the (at the time) relatively recent translation The  New English Bible between the ages of about 18 and 20.  I remember being amazed, but not scandalized by, the extreme amounts of violence and sex I encountered in the Old Testament.  Certainly, not stuff I’d ever heard about in Sunday School!  As I later on realized that very few others, even avid churchgoers (which I was not then, and did not become for a long, long time), knew little about the content of the Bible while still feeling free to loftily proclaim on it, I became quite appalled at the ignorance and presumption of so many purported Christians.   Hopefully I’ve managed to become a bit less judgmental since then; but I’m still appalled.

The one strong impression that I’ve never forgotten when I first read the Bible–and I think this occurred when I was reading it for the very first time, King James Bible–was reading the 22nd Psalm.  As I read the clear description of the Crucifixion–which of course happened over half a millennium (maybe a full millennium) after the writing of the Psalm in question–I felt the chill of something I can only describe as fear going up my back.  My God–this is an accurate and precise prediction of something the author couldn’t have known!  This stuff is for real!  That’s the tenor of what I thought.

Of course in the decades since, I’ve learned of alternate translations, arguments as to double meanings of prophetic writings, arguments that the New Testament authors touched up their accounts to make them accord with the OT, and that later scribes did the reverse, touching up the OT itself, and so on.  I’m a little less naive, but I’m not totally cynical, either.  I don’t believe as simplistically, but I still do believe, in fact, that the 22nd Psalm is a prophecy.  There’s much less prophecy of that sort in the Bible than I used to think, but that’s OK, and probably all the better.

As I’ve said before, for a long time after that–a period of about thirty-five years, in fact–I did not re-read the Bible.  I read bits and pieces again here and there, studied all major religions in college, flirted with Islam, Hinduism, and longest, Buddhism, then finally converted to Catholicism at the age of twenty-six.  A couple of years ago, in the process of teaching CCD Confirmation classes, and encouraging my students to read the Bible, I decided that the physician should heal himself–the last dose of medicine being three decades old and more–and plunged into reading the Bible again, choosing this time the first edition of the Ignatius Bible, a re-issue of the Catholic version of the Revised Standard Version published by Ignatius Press.

I’ve progressed slowly, partly because of other claims on my time, partly becaue of the cares and vicissitudes of life–which have seemed more vicissitudinous of late–and such; but after about two years I am at least nearly through Judges.  That has been sufficient to give me two impressions, so far.

One is that I’m glad I have a copy of the New Revised Standard Version as well as some other translations.  The RSV is venerable and is probably the most scholarly and carefully researched translation ever done in the English language.  However, the original RSV is certainly not that readable, in my opinion.  Part of its mandate was to remain as close to the KJV as possible, and indeed whole passages differ by hardly a word, in places.  Even the forms of “thou” are retained for addressing God.   This despite the fact that such usage actually goes beyond the text–the original languages did not distinguish levels of formality, using atah, sy, or tu equally to address a slave or the Deity.

In any case, my feeling was that it was too archaic and close to the syntax of the original to make reading it that much easier to read for something purportedly a “modern” version–just try to read passages in Leviticus or the letters of Paul for an example of convoluted prose.  On the other hand, close as it was to the KJV it was different enough to have lost much of the majesty and poetry.  I confirmed this when I read the KJV version of a couple of Gospels for Lent a couple years ago and was surprised at how smoothly and easily they flowed, despite the 17th Century language.  The RSV, in terms of readability (not scholarship, in which it’s superb), is in a sense the worst of both worlds–not quite clear and readable enough prose for a modern, but lacking the majesty and beauty of the King James.

Happily, the NRSV–the 1989 revision of the RSV–has largely remedied this fault.  The New Revised Standard Version is still the closest of any major modern translation to the KJV and is still more in the direction of formal equivalence than any of the rest; on the other hand, it has modernized the syntax enough to be much more readable than its predecessor.  I still have a soft spot in my heart for the New English Bible and its successor, the Revised English Bible (which came out at about the same time as the NRSV), but I’d say the NRSV is probably the best overall translation in terms of readability, faithfulness to the original as far as readability isn’t compromised, and overall quality of scholarship involved in producing it.  Later on, I may write a post comparing different translations.

The second impression was of how appalling the extreme amount of violence–and even worse, ostensibly Divinely-ordained violence–seemed to me reading it in my late forties as opposed to my late teens.  This reaction, in fact, was the original focus intended for this post, but I’ve rambled a bit more on it than I’d expected–the Spirit blew where it would, I guess.  I’ll discuss this second aspect of my reaction on re-reading the Bible in my next post on Scripture.

← My 50th Post!
Some Very Belated Music for the Labor Day Weekend →